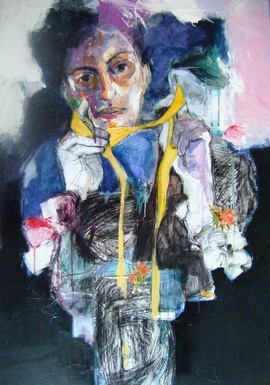 The human figure and colour have been my main interests throughout my work. Inspiration can come from anywhere and ideas brew internally and            usually surface unexpectadly. The work of Cezanne, Matisse and American expressionism have influenced me from early on.
Biographical Note

Fotini Hamideli was born in Greece and  studied art in the U.S. She is involved in teaching art lessons and collaborates with the Central Public Library of the city of Veria, organizing various events, lectures and art programs directed to children. She does graphic work designing posters, brochures and magazines and has written articles on art.  Her artwork has been published in several art publications. In Greece she first exhibited in “Diagonios”, a gallery in Thessalonici, directed by Dinos Christianopoulos, a famous Greek Poet. Fotini Hamideli has been showing her work since 1978, participating in over 90 group shows  in Greece,Germany,Italy,Spain and several other countries.She has had fourteen one woman shows.